Temperature is property of any matter which tells the sensitivity of hotness that we will feel when we touch it. How ever it does not indicate how much total heat energy it contains. For example of same mass of water and coal at same temperature water has absorbed more heat because its heat capacity is higher. But since temperature is a property which is associated with average energy each of its molecules of the substance is having you feel the same sensitivity when either coal or water at same temperature is touched with bare hands. 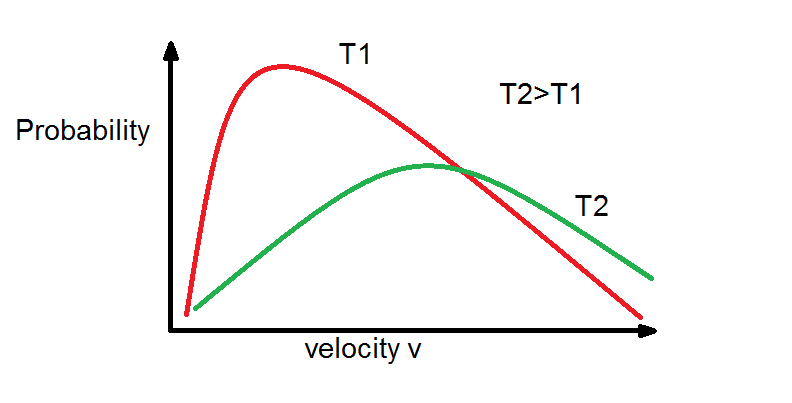 From Maxwell Boltzmann distribution we see that as temperature increases the the curve tends to be more flat that means average energy of molecules increases with rise in temperature.

It is different from entropy(a measure of randomness of molecules). For example if water and coal are at same temperature and have same mass and absorbs same amount of heat, coal will undergo more temperature change and lesser entropy change ie energy distribution among their molecule will be less random compared to water. That means energy distribution among its molecules will be more uniform.

Entropy=(a measure of randomness of molecules). For example if water and coal are at same temperature and have same mass and same amount of heat is supplied to both, coal will undergo more uniform distribution ie, energy distribution among their molecule will be less random and average motion energy change per molecule will be more compared to water. That means lesser molecules will be at rest compared to water.

So conclusively, if heat is given to a substance and its temperature does not rises and substance does not do any work then it entropy increases which means less order so the whole energy given is not distributed uniformly among its molecules most of that given energy is concentrated among few number of molecules.

Now that you know much about temperature watch this interesting video.

Now we know the entropy of system may increases or may remain the same. But what if the entropy decreases or the substance become more ordered. Such a substance is said to have negative temperature even though it has absorbed positive energy. For such a system to exist it has to saturate in entropy with probability of  higher states being small as illustrated with Fermi Dirac equation,

The probability(P) equation is for quantum physics by Ludwig Boltzmann. It is similar to Maxwell Boltzamn but instead of velocity, discreet energy states(A set of numbers defined by quantum physics. It has more to specify that energy state then the actual energy of that state.) are used .

Such a system is employed in lasers where the entropy is lowered but heat is applied. But if this is continued to saturate the entropy it will transit to absolute temperature of negative infinity.

Negative temperature does not mean no absolute motion of molecules or particles but a change in its state.

To achieve absolute negative temperature in labs the systems is cooled near to absolute zero as illustrated in the video below.

Most familiar systems cannot achieve this temperature but if such a system comes in contact with normal system heat will flow from negative to positive temperature.

Such a system if stable is hotter regardless of its temperature than any positive temperature system and becomes a continuous heat energy source because of the change in quantum state of the system.